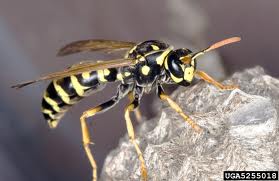 Wasps are generally seen as a benefit to the environment, wasps are predatory flying insects. Wasps are a great source of organic pest control on gardens, farms, and crops. There are commonly two types of wasps, solitary wasps and social wasps. Social wasp species live in large numbers. Wasp nests are abandoned by late autumn, the queens individually over-winter until spring. Wasps eat meaty things, spiders, and sweets. Wasps can be more hot-tempered than bees, and should be treated with caution. If you’re trying to eliminate nuisance wasps attached to your home or near a doorway, it is best done at sunset or very early in the morning; if inside the house or near the window, there is likely a nest in the attic.
There are many species of paper wasps in the US. Paper wasps are typically long with yellow and rusty brown or black stripes. Nests are naked or open and made of grayish paper-like material that is honeycomb shaped. Paper wasp nests are about the size of a hand or smaller containing 4 to 30 wasps per nest, not to be confused with hornets which are similar in shape, but have larger enclosed hives. Paper wasps are often found hanging under the eaves, but can also be found in attics, trees, as well as other structures. Paper wasps attack when aggravated and have a painful sting; they can also sting multiple times and do not loose there stinger.

Occasionally these wasps are found inside the house. This happens when a nest is living in the attic and there is perhaps a bit of light entering the attic from a ceiling fixture. In this case the wasp goes to the light thinking it leads back outside but ends up in the house. At this point the wasp will typically fly around near the windows looking for an exit. Wasps are much more comfortable navigating inside of a house than honeybees are, as honeybees simply go straight to the window and buzz until exhausted.
Paper wasps also build nests of
wood fiber, but their nests consist
of a single comb not enclosed by
an envelope. An average nest of
the golden paper wasp, the only
paper wasp native to Washington,
consists of about 200 cells,
while the largest nest is probably
less than 400 cells. Golden paper
wasp nests are most noticeable
under eaves of buildings, but
they are also constructed in logs,
under rocks, within shrubs and
grass clumps, and inside pipe.
Nests of the European paper wasp
are often less than 100 cells in
size but may possess 400 cells
and more. This wasp appears
to be quite flexible in selecting
nest sites, including under roof
shakes, within meter boxes, bird
houses, outside grills, and mail